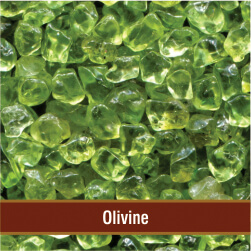 Olivine is one of the most common minerals in the earth and is a major rock-forming mineral. Despite this, good specimens and large crystals are uncommon and sought after. Only a few localities yield large examples of this mineral, although small and microscopic grains are found worldwide. Olivine is also found in meteorites, and large grains have been reported in many of them. Olivine is not scientifically classified by the IMA as an individual mineral species but is rather recognized as a mineral group with the Forsterite and Fayalite end members. Fayalite and Forsterite create a solid solution series, and most specimens identified as Olivine fall somewhere in between this series, almost always leaning more towards Forsterite with a greater content of magnesium. Pure Forsterite is uncommon, and pure Fayalite is very rare.